As an early christmas present 🎄 I’m happy to present you OctoPrint 1.3.6. This a true maintenance release again, consisting of various improvements and fixes. It was made possible only through your continued support of my work 💕.

The most important thing first: This release introduces a potentially breaking change with regards to how JS plugin assets are bundled - you can read all the gritty details here. Not many plugins should be affected by this, but some are and for that I also added a little (temporary) feature toggle that will allow you to go back to the old way of bundling (with all its downsides) until those plugins that are affected and that you rely on are updated. You can find that toggle under “Settings > Features > Enable legacy plugin bundling”. Affected plugins will produce errors in the JS console and most likely stop working in the browser - so if you encounter that for a plugin after updating to this version, try enabling that flag, saving and restarting your server and see if that fixes things - and if so best report the incompatibility to the plugin author. The plugins that so far are known to be affected by this are

With that out of the way, on to some highlights from the release notes:

If you don’t get an “Update Now” button with your update notification, read this or - even more specifically - this.

If you are running 1.2.7, get an “Update Now” button but the update is immediately reported to be successful without any changes, read this.

If you are running 1.2.16, get an “Update Now” button but the update is immediately producing an error message, read this.

If you have any problems with your OctoPrint installation, please seek support on the Mailinglist. 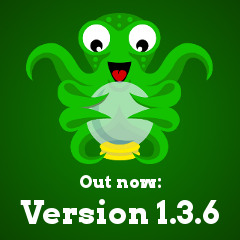