This third RC of 1.3.12 fixes two regression observed with the first and second one:

The heads-up from last time regarding a wrong version check included in 1.3.12rc1 still applies if you are coming from that version on OctoPi 0.15.1:

To manually update pip (via SSH):

You might have to “Force Check for Update” in the Software Update plugin after this.

To manually update OctoPrint (via SSH):

Special thanks to everyone who contributed to this release candidate and provided full, analyzable bug reports! 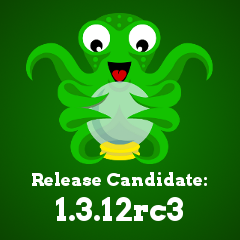