This is a hotfix release to fix three bugs in 1.4.1 that sadly only were reported after the release candidate phase for 1.4.1.

Due to that the changelog is very short and only consists of three bug fixes:

The heads-ups from 1.4.1 still apply, please read them carefully, they might impact you and how you use OctoPrint! Also see the Further Information and Links below for more information, where to find help and how to roll back. 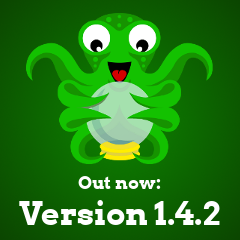