Thanks to a vacation and a surgery, this was one of the longest Release Candidate phases so far, spanning from August 4th until now. Thus I’m extra happy to finally present you with 1.7.0 today! 🥳

The full changelog contains a long list of new features, improvements and bug fixes, but here are some of the highlights:

OctoPrint 1.7.0 is the final release that will allow updating through the built in Software Update plugin. The Python environment on OctoPi 0.15.* has now become so ancient that the overhead of keeping on supporting it is no longer sustainable, and the likelihood of spontaneous breakage has increased significantly.

If you are one of the ~5% of users still on OctoPi 0.15, create a backup of your OctoPrint data, flash the latest OctoPi 0.18 to ideally a fresh SD card (they age too…) and restore from backup. That should get you up and running under a current OctoPi release in no time and additionally migrate you to Python 3.

Heads-up for anyone still on Python 2

I’ll do my very best to keep OctoPrint functional under Python 2 until the release of OctoPrint 2.0.0, however Python 2.7 has been EOL now for almost two years, a lot of third party libraries are releasing updates for Python 3 only at this point, and many plugin authors for OctoPrint do so as well.

It is time to upgrade, and so OctoPrint 1.7.0 will now show you a pop-up about that fact when you open the UI. You do not have to act, but it is strongly recommended you do if you don’t want to be left behind, and the pop-up will also tell you how to update: 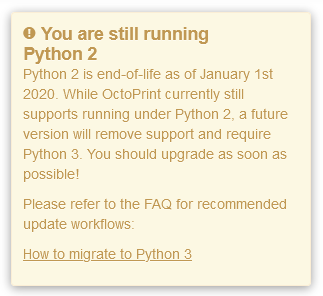 Please do, the less Python 2 users are out there I still have to support, the more time I have for moving towards 2.0.

Heads-up for plugin authors: `octoprint.util.get_free_bytes` has been removed

The utility function octoprint.util.get_free_bytes, now deprecated since version 1.2.5 in favor of psutil.disk_usage, has finally been removed. If for any reason you’ve been using this in your third party plugin, ignoring the deprecation warning OctoPrint has been printing out to the log since 2015, now is the time to finally fix things. If you are interested in some numbers, here's some data extracted from the anonymous usage tracking for the RCs that went before 1.7.0's stable release:

Due to this RC phase taking longer than 60 days, which is the current limit of the anonymous usage tracking, data for these RCs is not fully available anymore:

Overall there were 1976 instances that participated in the RC testing phase and which collectively completed 112267h or 12.8 years of print jobs. 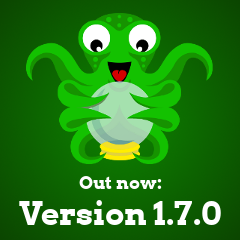