This third bugfix & security release for 1.8.0 fixes two minor bugs and closes a whole number of recently reported security vulnerabilities, primarily of low and medium severity, but also one high severity one:

You can also take a look at the changelog on GitHub which this time is a bit on the longer side.

In case you are wondering about the large number of security fixes in this release, the OctoPrint project recently got bombarded with reports from a bounty offering platform. This sadly caused a lot of overhead, as many of the reports were inaccurate, overstated to increase bounty payout or simply spam, and this proofed to be a real resource drain on me and the whole team. So while it was good that these things were now discovered and fixed, the way things went sadly came closer to a DDOS attack on maintainer resources than the collaboration and positive experience it should have been. You can hear more about this in OctoPrint on Air #47 and I will most likely once again talk about it in the forthcoming OctoPrint on Air #48 as well, which should come out sometime next week.

The heads-ups from 1.8.3 still apply, please read them carefully, they might impact you and how you use OctoPrint! Also see the Further Information and Links below for more information, where to find help and how to roll back.

For this bugfix release there are additional heads-ups:

Important notice about downgrading from this version

With OctoPrint 1.8.3, the password hashing has been changed to use the Argon2 hashing algorithm. Any existing accounts will be migrated to the new hashing format on their first login under 1.8.3 or later, and the accessControl.salt value will be stripped from the config once all accounts have been migrated as it is no longer needed. This however means that downgrading to an earlier version will result in no longer being able to login, since earlier versions of OctoPrint 1.8.3 have no idea what to do about the Argon2 hashes and require accessControl.salt as well. However, OctoPrint 1.8.3 and later come prepared for this scenario and will create a backup of both your users.yaml and config.yaml files, to make sure you can manually roll those back should for whatever reason you need to downgrade to a version prior 1.8.3. Find out more in the FAQ.

Plugin authors: Check out the changes due to OctoPrint's new CSRF protection

To protect OctoPrint against CSRF attacks against the non CORS affected upload endpoints, in case of browser session based authorization the API is protected using the Double Submit Cookie mitigation strategy. You can read more about how this is implemented and how it might affect your frontend code in the docs. If your plugin happens to implemented the BlueprintPlugin mixin, please also read up on the changes on that that relate to CSRF protection and what steps you must take to get rid of warnings you will now see in the logs otherwise. You can find the updated docs on the BlueprintPlugin mixin here. 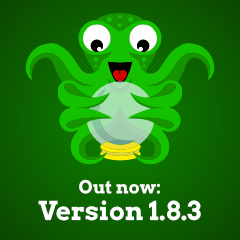