I’m happy to present you the first release candidate of the 1.3.7 release!

The changelog is once again on the lengthy side again thanks to the maintenance releases now being spread apart a bit further. Don’t let that scare you though 😉

Here are some highlights from the release notes:

If you are tracking the “Maintenance RC” release channel, you should soon get an update notification just like you are used to from stable releases.

If you want to help test this release candidate and aren’t yet tracking the “Maintenance RCs” release channel, you can find information on how to switch in this guide (also linked below).

If you are not interested in helping to test release candidates, just ignore this post, 1.3.7 stable will hit your instance via the usual way once it’s ready 😊

Please provide feedback on this RC. For general feedback you can use this ticket on the tracker. The information that everything works fine for you is also valuable feedback 😄 For bug reports please follow “How to file a bug report”. 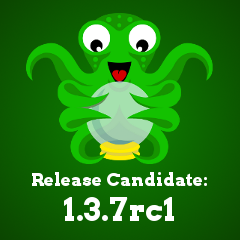