Guy Sheffer has released OctoPi 0.15 - big thanks to him and also to everyone who helped test the release candidate and the nightly builds that went into this and reported back!

Apart from adding support for the Pi 3+ and of course shipping with the current stable OctoPrint version 1.3.8, 0.15 also contains the following changes:

We have moved to build with CustomPiOS, which means that OctoPi has joined a larger build system which supports lots of modules and cool ways to configure and maintain debian-based IOT distros.

The most important change for anyone setting up a new OctoPi image now here is that the file used to configure your wifi has changed. You no longer have to edit octopi-network.txt (which is now non functional) but edit octopi-wpa-supplicant.txt. This change had to be introduced due to limitations of the old method with regards to certain network setups and also due to more and more incompatibility to the direction the Raspberry Pi Foundation is taking the underlying Raspbian base image.

The full release notes can be found at github.

You can download OctoPi 0.15.0 from the usual place. If you are asking yourself how to update from an earlier version of OctoPi, please read on.

So no pressing need to reflash!

If you want to however, make sure you back everything up. I might look into a way to automate this too. 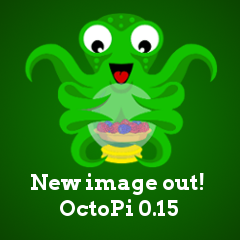