It’s time to get the next stable release 1.3.11 out of the door and as you all know, the first step towards that goal is always a first release candidate.

The full changelog is somewhat long again and packed with improvements and fixes of existing functionality, most of which this time is behind the scenes. Some highlights:

There are also two heads-ups. One concerns the Cura slicing plugin which got unbundled and renamed to “Cura Legacy” as already mentioned:

If you rely on the Cura Plugin for your workflow that so far was bundled with OctoPrint, be sure to install the Cura Legacy plugin that’s now also available on the plugin repository.

Once installed the Cura Legacy plugin will import the settings and profiles from the former bundled Cura plugin automatically on first start.

The Error Tracking plugin is a completely separate plugin from the existing Anonymous Usage Tracking plugin. Its tracking is disabled by default. Its purpose is to collect error information from instances in order to allow better issue analysis especially during the Release Candidate phase, or when prompted after reporting a bug. Thus it will also ask you to enable it on start while subscribed to an RC release channel.

The plugin uses a sentry.io instance, kindly provided to OctoPrint by sentry.io. 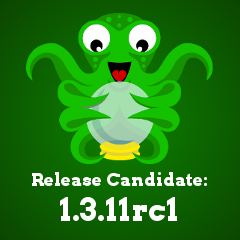