Work on OctoPrint continues on even though the world out there is crazier and scarier than the normal, and I’m happy to hereby present you the first release candidate of the upcoming 1.5.0 release.

“Wait, 1.5.0 already?” you might say, “You just released 1.4.0 earlier this year!” That’s correct - OctoPrint’s versioning has slightly changed and now fully adheres to the ideas behind semantic versioning, as-in, the so called PATCH number (the 0 in 1.5.0) will now only increase for releases containing bugfixes only. Instead, for the usual maintenance releases that contain improvements, fixes and the one or other new feature, the MINOR number (the 5 in 1.5.0) will increase from now on. Finally, backwards incompatible changes will increase the MAJOR number (the 1 in 1.5.0) - in OctoPrint’s specific case that will mean dropping Python 2 support in the not so distant future.

So, from 1.4.2 to 1.5.0 this makes a MINOR number increase and thus you can expect more than just bug fixes in this one :) Let’s have a look at some of the highlights from the changelog, shall we?

Heads-up: Access Control is now mandatory and no longer can be disabled

If you so far had Access Control disabled, upon upgrading to 1.5.0, OctoPrint will prompt you to create a user name and password for the (first) admin user. This step was sadly necessary as too many people still will happily expose their completely unsecured OctoPrint instance on the public internet, causing additional support overhead from both attacked users and security researchers. See this guide for a way to have OctoPrint log you in automatically when connecting from an internal IP.

Special thanks to everyone who contributed to this release candidate and provided full, analyzable bug reports, you help making the next release as stable as possible! And a big Thank You to @chudsaviet, @coldtobi, @cp2004, @frenck, @j7126, @jneilliii, @ManuelMcLure, @mjrider, @OllisGit, @shaver, @Sophist-UK and @urish for their PRs! 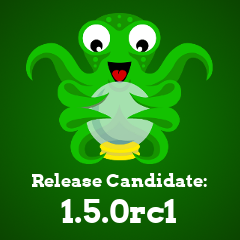