Guy Sheffer has just released OctoPi 0.18.0 - big thanks to him and also to everyone who helped test the release candidates and the nightly builds that went into this and reported back!

You’ll note that OctoPrint is still at 1.5.2, not the latest 1.5.3 released last week - the RC for OctoPi was already underway and we didn’t want to delay the image even further for another RC round including the latest bugfix release. However, you can just immediately upgrade OctoPrint, it should prompt you.

You can download OctoPi 0.18.0 from the usual place. If you are asking yourself how to update from an earlier version of OctoPi, please read on.

Normally there’d be no pressing need to reflash, however since this image finally ditches Python 2 in favour of Python 3, which apart from continued support also adds some nice performance improvements, you might want to switch sooner rather than later.

If so, read here on how to create a backup of OctoPrint which you can apply after reflashing and updating to the latest version. 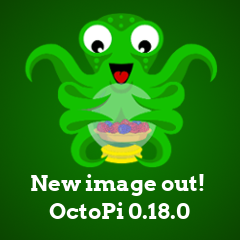