I hope you are having a nice summer, even though we are still in the middle of a pandemic. The last weeks here in OctoPrint HQ aka my office have been primarily spent on working on what is going to be 2.0.0, however there was also a significant amount of work that went into the next minor release, and thus I’m excited to share with you the first 1.7.0 release candidate today!

As always, there are quite a number of improvements and fixes in this one. How about we take a look at some of the highlights from the changelog together?

Heads-up for plugin authors: `octoprint.util.get_free_bytes` has been removed

The utility function octoprint.util.get_free_bytes, now deprecated since version 1.2.5 in favor of psutil.disk_usage, has finally been removed. If for any reason you’ve been using this in your third party plugin, ignoring the deprecation warning OctoPrint has been printing out to the log since 2015, now is the time to finally fix things. 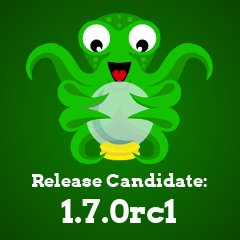