Given how long this has been brewing, the changelog has grown quite large. Let’s take a look at the highlights, shall we?

As previously announced on the OctoBlog and in OctoPrint On Air #43, OctoPrint 1.8.0 drops Python 2 support. In order to be able to install/update to it, you need to be running OctoPrint under Python 3 already, e.g. as shipped on OctoPi 0.18.0. Installing on Python 2 will fail. The Software Updater will also be redirected to a new OctoPrint Legacy repository for checking for OctoPrint updates if it detects that you are still running Python 2. As outlined in the blog post and the vlog, there are no more updates for OctoPrint 1.7/Python 2 planned. Update now or you will be left behind.

If you are unsure what version of Python your OctoPrint instance is running under, open the web interface and look into the lower left corner where it will tell you:

This is also covered in the FAQ.

Heads-up for plugin authors: Importing Jinja2 templates from another plugin without an explicit prefix is now deprecated!

OctoPrint so far allowed (erroneously) to replace plugin templates of the same name in another plugin, depending on loading order. Fixing this required to create prefixes for templates of plugins. Relative imports (think {% include "snippets/my_snippet.jinja2" %}) will now attempt to resolve against the current plugin. If that isn’t possible, for now it will also be attempted to resolve globally against all registered templates and if a match is found, a deprecation will be logged. The latter behaviour will be removed in a future version of OctoPrint and if your plugin includes templates from other plugins you should now change it to using plugin prefixes if running on OctoPrint 1.8.0 or higher. Plugin prefixes are plugin_<plugin identifier>/, so for example, to include the settings pane of the bundled software update plugin, you’d now need to use plugin_softwareupdate/plugin_softwareupdate_settings.jinja2.

Heads-up for plugin authors: `octoprint.util.bom_aware_open` is now deprecated and will be removed in 2.0.0

If your code uses bom_aware_open, you should replace its use with the regular open with utf-8-sig encoding instead (or io.open in py2/3 compatibility mode).

Heads-up for plugin authors: `octoprint.util.commandline.clean_ansi` will no longer accept `bytes` in 2.0.0

If your code uses clean_ansi somewhere, make sure you supply it with str (formerly known as unicode) instead of bytes objects.

You can find the full changelog and release notes as usual on GitHub. 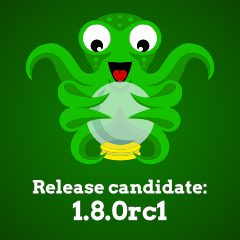