This second release candidate of the 1.3.7 release fixes a few regressions and bugs in new/improved functionality that were found and reported in 1.3.7rc1 or just finally identified due to changes introduced in 1.3.7rc1:

If you are tracking the “Maintenance RC” release channel, you should soon get an update notification just like you are used to from stable releases.

If you want to help test this release candidate and aren’t yet tracking the “Maintenance RCs” release channel, you can find information on how to switch in this guide (also linked below).

If you are not interested in helping to test release candidates, just ignore this post, 1.3.7 stable will hit your instance via the usual way once it’s ready 😊

Please provide feedback on this RC. For general feedback you can use this ticket on the tracker. The information that everything works fine for you is also valuable feedback 😄 For bug reports please follow “How to file a bug report”. 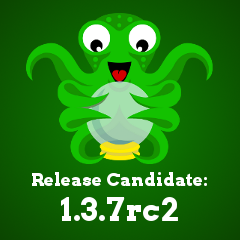