Guy Sheffer has released OctoPi 0.17.0 - big thanks to him and also to everyone who helped test the release candidates and the nightly builds that went into this and reported back!

Apart from adding support for the Pi 3A+ and of course shipping with the current stable OctoPrint version 1.3.12, 0.17.0 also contains the following changes:

Changes in the image

The full release notes can be found at github.

You can download OctoPi 0.17.0 from the usual place. If you are asking yourself how to update from an earlier version of OctoPi, please read on.

So no pressing need to reflash!

If you want to however, create a backup. 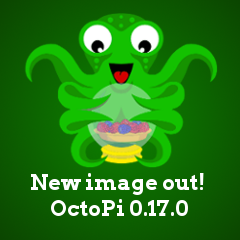