After almost a month of release candidate testing, I’m happy to be able to present you the next stable OctoPrint release today: 1.6.0 has just been released! 🥳

The full changelog contains a long list of new features, improvements and bug fixes, but here are some of the highlights:

Heads-up for plugin authors: Support for the plugin control properties `__plugin_init__` and `__plugin_implementations__` (plural!) has been removed

The two plugin control properties __plugin_init__ and __plugin_implementations__ (note the plural!) have been deprecated ever since OctoPrint 1.2.0 and have finally been removed. It is highly unlikely that your plugin has ever used them given that they were already marked as deprecated for the very first version of OctoPrint to ever even support plugins. Still, just in the case of anyone out there making use of them regardless, here’s a heads-up that they will no longer be utilized in OctoPrint 1.6+. If you are interested in some numbers, here's some data extracted from the anonymous usage tracking for the RCs that went before 1.6.0's stable release:

Overall there were 1702 instances that participated in the RC testing phase and which collectively completed 63264h or 7.2 years of print jobs. 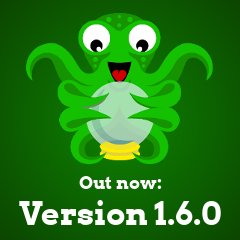